Houses can be recycled, too. Theoretically, at least. In practice, however, the reuse of building materials hardly plays a role, even though it could protect the climate. Until now, it was too complicated for companies. The start-up Concular, based in Stuttgart and Berlin, wants to change that - and transform the construction industry into a circular economy.

For our interview, we sit in a backyard in Berlin-Friedrichshain and look out over an old brick building that has survived surrounded by residential and office buildings. After its construction in the late 19th century, it initially housed stables. Today it houses start-ups like Concular, which Dominik Campanella co-founded and of which he is Co-CEO.

Right now, two construction workers are building a knee-high wall around the building, also made of red brick. „They’re using historic bricks from Brandenburg,“ says Dominik, „so-called Reichsformat bricks that were used before 1945 and were still formed by hand.“ Actually, he’s pleased that they’re using bricks that were originally in someone else’s house. Because that’s what Concular is all about, too: Saving quality building materials that can be reused from their current common end in a landfill or as cheap fill material in road construction. „But unfortunately, this will probably be the last time these bricks are brought in.“

Today, people usually don’t even think about what happens to building materials when a building is demolished at some point. In the past, things were different. „Back then, people built with clay mortar,“ Dominik explains. „That had the advantage that you could simply knock the bricks out again when they were demolished and then immediately reuse them.“ Today, brick layers - as with the wall in Friedrichshain - are bonded with cement mortar, which adheres very strongly. „You can never get the bricks apart again.“

Building is - still - quite harmful to the climate

The construction and real estate industry is responsible for about 40 percent of German CO2 emissions. Admittedly, the majority of this is still caused by the use of the buildings, by heating, for example. But „grey energy“ already accounts for 25 to 40 percent of emissions - the energy used in the construction of houses, for example in the production of the necessary cement. The proportion of grey energy continues to rise because, although buildings are becoming more and more energy-efficient in operation, there is little change in the standard procedure for construction and demolition.

Even though the production of cement and concrete is considered harmful to the climate, it is responsible for eight percent of global CO2 emissions, the recycling or reuse of building materials and thinking in material cycles hardly plays a role. Almost always, when old buildings are demolished, the rubble ends up in a landfill or is ground up and used as simple fill material - downcycling instead of recycling, in other words. A new property is then built on the same site using new building materials. „The reuse rate of material in Germany is currently at one percent,“ says Dominik Campanella. „So it is almost non-existent.“ His start-up Concular aims to change that.

To imply that the entire construction industry has no desire to reuse old materials would be wrong. This is what the later Concular team found out during talks with a hundred different professional players - for example architects, construction companies, demolition firms. It’s just been too complicated and expensive to worry about reusing materials. „Most property owners don’t even know what materials are in their buildings in the first place,“ Dominik explains. „That’s why it’s not until demolition that people realize there might be valuable things in there.“ By then, however, it’s too late, he says. Because demolition has to happen quickly. Two weeks on average. „But you can’t find buyers in that short time. And storing material would be too expensive.“ So it is thrown away.

To prevent this from happening in the future, Concular has developed software to digitally record the materials in a building before demolition. Ideally about a year beforehand. The buildings then receive a „digital passport“. Concular employees are still involved in this assessment, but in the future the software should be so easy to use and so smart with the help of image recognition algorithms that basically anyone should be able to create a digital passport - simply by taking photos that can then be analyzed and by adding some information in the app. 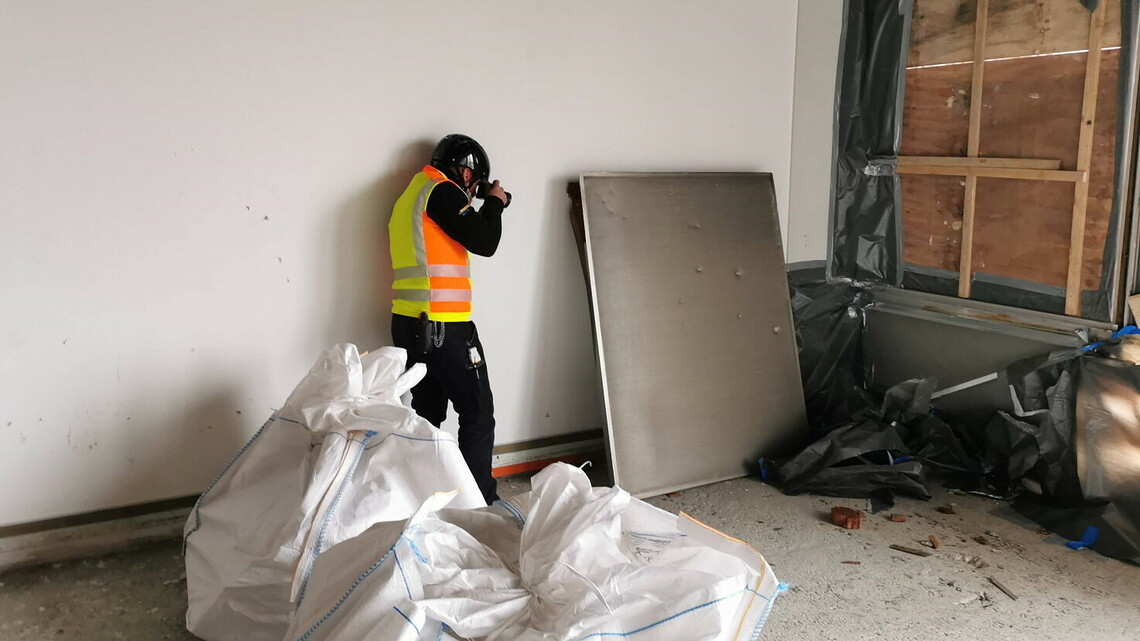 In time before a house is demolished, Concular captures the materials that can be reused. Image: Concular1473×829 185 KB

Now the property owners know what is in their demolition building. But where are they supposed to find buyers? Concular offers a solution for that, too. „We work with a lot of architects and real estate developers,“ explains Dominik Campanella. „They have access to our software, they can upload their designs there and so we automatically know what materials they need.“ By creating digital passports, Concular also knows when which demolition materials are available - and can match supply and demand via algorithms. Concular and its partners also take care of reprocessing, re-certification and transportation.

„The materials we’ve already brokered are super individual - depending on the building,“ Dominik says. „Stones, wood, glass, metal. From aluminum façade elements to bricks and wooden beams to carpet tiles or system stairs. Sometimes even entire exterior staircases that are hot-dip galvanized can be completely reused.“ Concular has completed several dozen projects. For example, building

components from an old supermarket have been reused, a residential building has been digitally recorded, but also large and well-known properties: the Mercedes Benz Arena in Stuttgart or the Karstadt Hermannplatz in Berlin. In the conversion of both properties, building materials from the existing building are to be reused.

Financially, Dominik says, reusing is well worth it. „The current building owner gets money for material that they then don’t have to dump, which in turn saves them money. The deconstruction company makes more because they have to put more time into demolition. And the buyers get the reclaimed material for the same price as new material.“ That’s not an economic win for them, he says, but it is an environmental one.

The fact that entire houses can be built from recovered, recycled or recyclable materials is proven by model projects that are being created in various countries. In Hanover, for example, Germany’s first recycling house was completed in summer 2019. More than 50 percent of it is made of recycled materials: from exposed wood walls made from old sauna benches to façade insulation made from old jute sacks to stair railings from an old recreational home. However, the original goal of relying entirely on recycled materials was not achieved - for example, because used windows no longer meet current specifications.

Instead, only materials that can be reused or recycled were used for the residential building.

In Switzerland, the Urban Mining and Recycling Unit, or UMAR for short, is a building that was also constructed in a recycling-friendly manner. It consists entirely of reusable, recyclable or compostable resourcesIn Munich, on the other hand, a model pavilion made entirely of recycled concrete was inaugurated a few weeks ago, made from the demolition material of the Bayernkaserne, which used to stand on the site. The pavilion is intended to demonstrate the possible uses of the material.

So far, these projects have one thing in common: their idealism. In order for the entire construction industry to become a circular economy, the political framework would first have to change, says Dominik Campanella of Concular. „Until now, it was simply cheaper to tear down and build anew with new materials - even if that makes no ecological sense whatsoever. So politicians should economically incentivise ecological building, for example by putting a CO2 price on new building materials or abolishing VAT on reused materials.“ Building regulations would also have to change. Because: „The approval of reclaimed materials is difficult, very difficult.“

And the founder has another demand: If the state itself has one of its buildings demolished, it should order the digital recording of the materials. If it builds, then it should stipulate that a certain proportion of reused building materials is brought in. „The state is the largest client for new buildings in Germany,“ Dominik says. „It simply has to use this leverage.“ 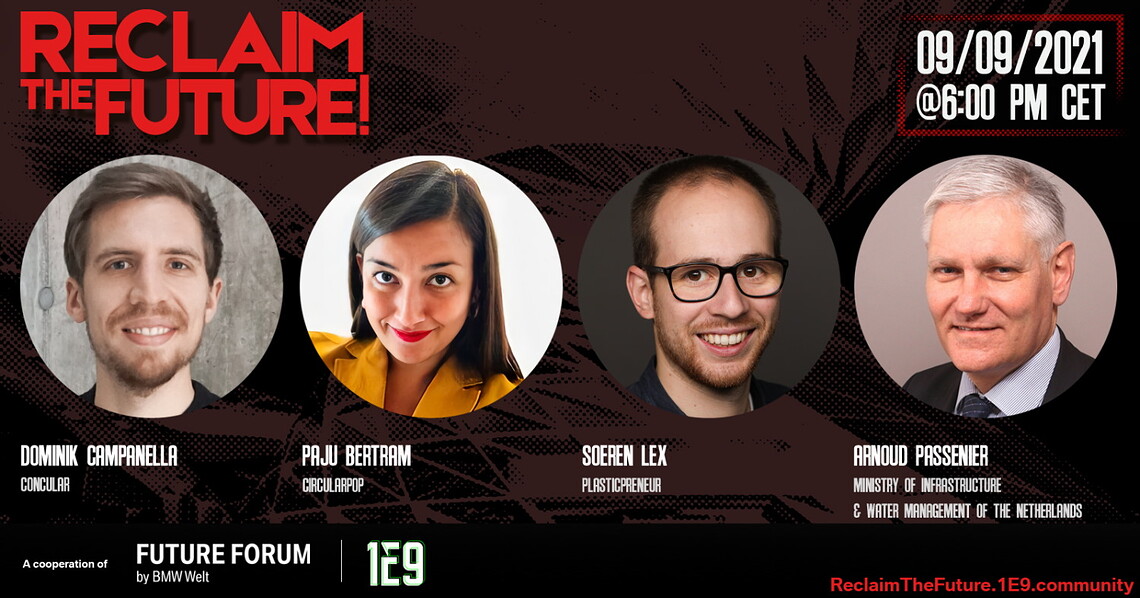 RtF 090912 Speaker 1500px1500×788 276 KB
Dominik Campanella of Concular discusses the transformation to the Circular Economy with Sören Lex of Plasticpreneur, Paju Bertram of Circularpop and Arnoud Passenier of the Dutch Ministry of Infrastructure on September 9th.

On September 9 from 6pm, the next edition of Reclaim the Future!, the digital event series from 1E9 and the FUTURE FORUM by BMW Welt, will focus on the importance of the circular economy. The title: Let’s close the loop: creating a circular economy. We will present concrete solutions to reuse plastic and construction waste, discuss how to turn cities into Circular Cities, and find out what role industrial corporations and politics have to play. Tune in and ask your questions! Here’s all the info and on 9 September also the livestream and chat tool.