Germany’s first quantum computer is up and running. Even the German chancellor raves about the technology’s potential. But so far, quantum computers are only outperforming classical computers in experiments. It could be decades before they deliver practical added value, critics fear. European startups like Qu & Co or IQM, on the other hand, want to prove that it could happen much faster.

Dramatic music. The earth floats in the darkness of space. Then the camera zooms in further and further, taking us into a nondescript building somewhere in Europe. The rhythmic beating of a heart can be heard. Five. Four. Three. Two. One.

The curtain falls, revealing the mysteriously lit, floor-to-ceiling glass box around which everything revolves on this June 15, 2021. IBM Quantum System One stands at the bottom left corner of the structure. Inside, a shimmering metal cylinder hangs from the luminous ceiling. Applause. A bit of cheering. Then Martin Jetter of IBM Europe stands on the stage. „Thank you very much. And a hearty ‚Grüß Gott‘ here from Swabia,“ he says.

Unmistakably, the quantum computer has arrived in Germany. A model with 27 quantum bits, manufactured by the U.S. corporation IBM and operated jointly with the German Fraunhofer Gesellschaft. The elaborate show may well seem exaggerated. After all, none of the quantum computers currently available in the world are suitable for commercial use in industry, not even the one in Ehningen near Stuttgart. They produce far too many errors for that.

And yet, in Stefan Filipp’s view, the commissioning of the IBM system in Baden-Württemberg is a milestone. „On the one hand, because we are now feeling a real sense of optimism in Germany on the subject of quantum computing,“ he says in an interview with 1E9. „On the other hand, because it’s crucial to now have the opportunity to experiment with quantum computers and use them to test which algorithms work how well, so that we can develop the first applications that deliver tangible added value as quickly as possible.“

Stefan Filipp researches quantum computers as a professor at the Technical University of Munich and as director of the Walther Meissner Institute; he has also worked for IBM - and he advised the German Chancellor’s Office on formulating a political strategy to promote the technology. It is also thanks to him that the German government is supporting the emerging quantum ecosystem with an additional two billion euros.

That’s a lot of money. But it also beckons a billion-dollar market, should quantum computers live up to the enormous expectations. For a long time, they sounded like science fiction. But in the U.S., Google already proved in 2019 that they can leave classic supercomputers behind. At least in an experiment. There are also new success stories coming from China all the time. So, Germany and Europe have to catch up - and still hope for further breakthroughs just like everyone else. Because the biggest open question is when quantum computers will become really useful. In a few years? Or only in decades?

New materials and a lot of optimization

How exactly quantum computers work is difficult to explain. But what their advantage over classical computers lies in can be said - greatly simplified - like this: Because they work with qubits and not bits, they can process huge amounts of data in the shortest possible time. Some calculations that would take years on classical computers can be done - in theory at least - in seconds.

This could - theoretically at least - make it possible to simulate entire complex molecules, which is unthinkable with classical computers. The pharmaceutical industry could thus develop new active ingredients much faster. Research into new materials, for example for better electric car batteries, could also get a boost from quantum computers. Even the processes of nuclear fusion could be simulated. And they could also solve complex optimization problems much faster - from traffic management in major cities to the management of factories and supply chains to asset management. Quantum machine learning could also further improve artificial intelligence.

In practice, however, much less can be done with existing quantum computers. To put it simply, the qubits are rather shy when it comes to external influences. Although the processors are operated in a vacuum and cooled to almost absolute zero, they can only be used stably for calculations for a fraction of a second.

As a result, today’s devices produce errors, also called noise. A large number of qubits, hundreds of thousands, maybe even millions, could change this, because they could be used to correct the errors. A universal quantum computer would thus be possible. But such machines are unlikely to exist, for example, from the perspective of the U.S. National Academies of Sciences, Engineering and Medicine, in the next years.

After all, the current, error-prone top quantum computers have fewer than a hundred qubits. That’s why they are called Noisy Intermediate-Scale Quantum Computers, which are quantum computers of intermediate qubit count that have to deal with a lot of noise. But if some startups and large industrial groups have their way, NISQs could also already deliver tangible quantum benefits - in other words, results that would simply not be possible with classical computers.

Among those who have no doubt that „industry-relevant quantum advantage“ is possible with the quantum computers that will be available in the next few years is Benno Broer. He is founder and chief executive of Qu & Co, a Dutch startup that develops quantum algorithms.

„If I were one of those who thought it would take another ten years or more, I wouldn’t have gone into this business after all,“ he says in an interview with 1E9. He estimates that the first commercial applications will be available in three to five years. The prerequisite for this is to start now with prototypes and experiments - and to do so together with potential users from industry. „Otherwise, interesting academic research results may come out of it, but no product.“

Qu & Co is still programming algorithms and software in a prototype state, for example a platform for simulating chemical processes and new materials. But even these early products enable partners to gain initial experience with quantum computers and get closer to practical applications step by step. The start-up is cooperating with Airbus to enable better simulations of flight physics. With a subsidiary of the U.S. company Johnson & Johnson, Qu & Co wants to find methods that can advance research and development in the pharmaceutical industry. Projects are also underway with BMW, LG and Covestro.

Benno Broer is convinced that ways will be found to work with NISQs, or „noisy“ quantum computers - through improved algorithms, through entirely new algorithms and through hardware tailored to applications. „Certainly there will be disappointments,“ he says. „But if we all work together - software developers, hardware vendors and users - we’ll get tangible results in three to five years.“

IQM Quantum Computing is also working on achieving the quantum advantage in the next three to five years and is also cooperating with large corporations, such as Atos and Infineon. IQM, however, is approaching it from the hardware side. The Finnish start-up with a subsidiary in Munich is building quantum computers. Four of them are already in its own lab, one at a customer in Finland - and an IQM-led consortium has been awarded 12.4 million euros by the German Research Ministry to develop a 54-qubit processor.

IQM is not expected to need millions of qubits for a real advantage over classical computers, which may well be unattainable in this decade. Just a few hundred should be enough. That’s because IQM is not only building universal quantum computers but also building quantum computers whose hardware has been designed for very specific applications.

„We adapt the topology, operations, and computational elements in our chips to the problems we want to solve,“ explains quantum physicist Inés de Vega in an interview with 1E9. In her career as a scientist, she explored from a theoretical perspective „noise,“ which produces the many bugs that still plague today’s quantum computers. At IQM, she now serves as Head of Quantum Innovation - helping to make quantum computers useful despite their susceptibility to errors.

„Many quantum algorithms would theoretically only need a few hundred qubits to work,“ she says, „but in practice, quantum computers produce errors and a larger number of qubits is needed to correct them.“ In general, the more complex an algorithm, the longer the calculation takes, and the more errors due to environmental noise and other sources will occur.

This is exactly where IQM comes in with its hardware-software co-design. „If the chip of the computer is already tuned to the problem we want to solve, we can use more efficient, lean algorithms, which leads to fewer errors.“ Put simply, the hardware should do some of the work for the software. The software can therefore be less complex. As a result, she said, depending on the application you may not need as many qubits or as many operations to reach a quantum solution, which may lead to quantum advantage sooner.

For instance, when one wants to simulate the behavior of physical systems like complex molecules and materials, it is convenient to design a chip that implements some of its properties with resonators rather than qubits. „When simulating the properties of the target quantum system,“ says Inés de Vega „it is much more efficient to design a quantum computing hardware that maps or represents as good as possible the system itself.“ Research into new materials or medical agents could therefore be the first to benefit from the quantum advantage. But IQM is also working on solutions for optimization problems, for example in the financial industry, or in quantum machine learning.

The buyers in German industry are ready

In order to be the first to benefit from quantum software - for example, through better batteries, optimized financial portfolios, perfected production processes or new medicines that provide an advantage over the competition - German corporations from several industries joined forces to form the Quantum Technology and Application Consortium, or QUTAC for short. These include Volkswagen, BMW, Siemens, Infineon, Munich Re, Airbus, Merck and BASF.

They all want to work together with research institutions and start-ups and also launch their own projects to create a German and European ecosystem. Because if the big ceremony with IBM to inaugurate the first quantum computer in Germany showed one thing, it was the dependence on American suppliers.

„So our goal must be to be able to build our own quantum computers in Germany,“ says Stefan Filipp of TU Munich for that reason. „Only then will we know exactly how the hardware works - and what we can do with it.“ But a quantum computer made in Germany - or made in Europe - is also likely to be just a matter of time. Whether in Munich or Jülich, Freiburg or Lower Saxony, local alliances are forming in many places to help shape the quantum future. 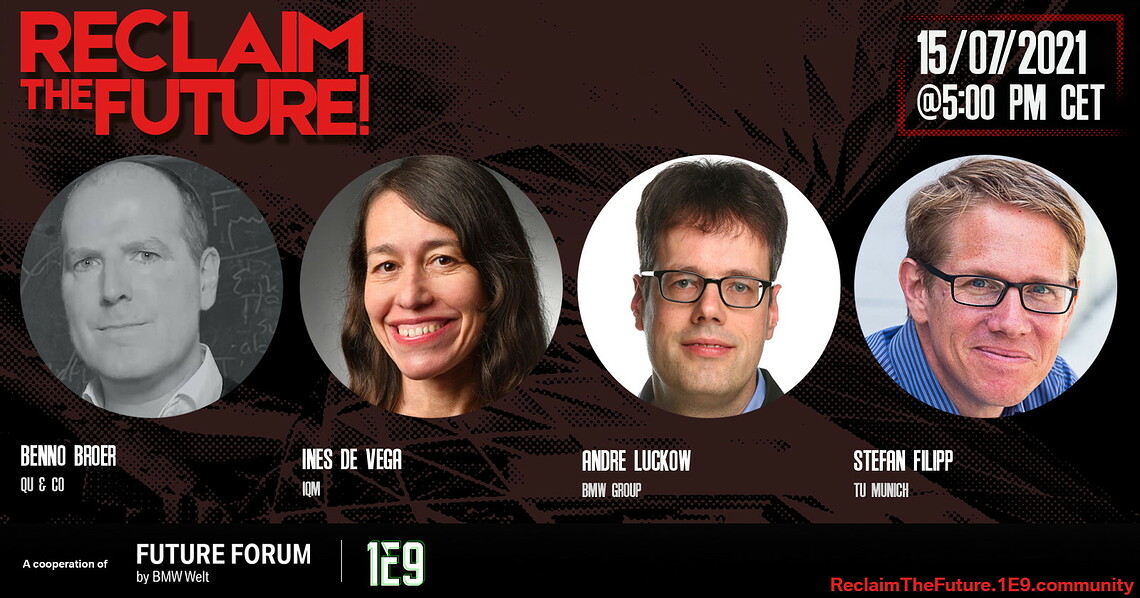 With four experts we discuss the fastest way to quantum advantage. You can ask questions, too, of course!1600×840 308 KB

You want to delve deeper into the topic? Then tune in on Thursday, July 15th 2021, at 5:00 p.m. for the next digital Reclaim the Future! event from 1E9 and the FUTURE FORUM by BMW Welt. The topic: „Getting the Quantum Advantage on the Road“ Find all info on the speakers, which include Prof. Stefan Filipp, Benno Broer and Inés de Vega, and the stream here .