The Munich-based company Ottobahn wants to reinvent the suspension railway. Mini-capsules controlled by artificial intelligence are to pick up passengers wherever they happen to be and be coordinated so that they always have a free drive. Various cities are already interested in the technology - a prototype for the real world test is to be built in the coming year.

It can get really crowded and uncomfortable. Especially in large cities, countless cars are parked bumper to bumper in rush hour traffic. The only way to move forward is in stop-and-go mode. An accident immediately leads to a traffic jam. And the search for a parking space drives many to despair. If a small portion of the road is then given over to cyclists and e-scooter drivers, this can lead to fierce protests. That’s why traffic researchers and activists have been calling for a rethink for years – and the search for alternatives to the automobile. One of these is currently being created in a stylish office building in the south of Munich, which is hidden in what looks like a rather staid multi-purpose building in the so-called Sirius Business Park.

In an oval of around 36 meters, a battery-powered gondola makes its rounds on an elevated track, passing desks, water dispensers and meeting rooms. For a ride through the office, the capsule is summoned via app. Silently, almost inaudibly, it then whizzes up, stops and whizzes on after boarding. The futuristic gondola system is called Ottobahn and is the transportation vision of the start-up of the same name. If the so called „can do officer“ Marc Schindler has his way, it has the potential to trigger a real transportation revolution and completely change the way people move in and between cities.

The capsules, which are currently whizzing around the office, are expected to be driving through street canyons, alongside highways and anywhere else where people or goods need to be moved in just a few years’ time at a height of five to ten meters. „The idea is already several years old,“ says Schindler. It came about, he says, as a result of the „painfully experienced problems of traffic collapse“ in cities around the world. Schindler is a car enthusiast himself and previously worked at Audi. But he believes that individual transportation by car simply no longer works and is therefore not future-proof.

What distinguishes the Ottobahn from ropeways, which are proposed as transport solutions for metropolises, or even classic aerial tramways, is said to be its immense flexibility and efficiency. The capsules, which can accommodate up to four people or a ton of freight, will not sit firmly on the rail network but can be lifted up and down by hoisting devices. Depending on the current demand the small capsules are to travel exactly where they are needed thanks to a well-designed network, but above all thanks to a sophisticated guidance and control system and a user-friendly app.

„The efficiency of the system comes from the software control,“ says Schindler. „All the cabins coordinate their travel paths with each other using AI.“ Thousands of capsules are to be coordinated by intelligent algorithms in real time so that each of them always has a clear path. Emergency and outage situations are also to be factored in, and the network is to be „driven to the highest possible level of energy efficiency.“ The software platform that makes all this possible is the real challenge and achievement in the development, he says. As CEO Marc Schindler says, the Ottobahn team would therefore rather „see itself as a software company“ than as a mobility or engineering company.

A capsule’s path could be intelligently controlled so that when it is summoned for the evening drive home, it immediately brings groceries from the supermarket or a pizza from the delivery service. It should also be possible to travel home together with friends or family members, even if they get on at different places. There is no need for fixed stops, by the way. Almost everywhere, the capsule should be able to be lowered from the elevated track like an elevator with cables and then pulled up again to then drive away from the cars in the city at 50 to 60 kilometers per hour. According to Ottobahn, several capsules could also travel as a convoy between cities and towns, reaching speeds of up to 250 kilometers per hour.

The capsules are expected to be so energy-efficient on the road that the entire system can run on 100 percent renewable energy. The two electric motors that provide the propulsion would have to be little more powerful than a vacuum cleaner. Much of the electricity required could therefore also be generated directly on site. This is because the high rail tracks are to be landscaped and equipped with walkways for pedestrians, which in turn will be covered with solar cells. The track could function like its own power plant. „The batteries of the individual drives serve for the grid management of the electricity,“ says Schindler.

The test track is scheduled for construction in 2022

The prototype in the start-up’s office building shows that Ottobahn’s technology basically works. The first version of it was already on the road after six months. That’s because the developers are relying on proven technologies and components that are already available, combined in a „new and precisely innovative way,“ as Schindler says. These include suspensions from Germany or drive wheels and batteries encased in plastic, which are actually used in e-bikes. „We now already have working chassis and cabins, and especially the software control system, on our in-door test track,“ Schindler says. „In the next step, we plan to build an outdoor test track to validate the technology.“

Its construction is planned for 2022 on a field near the municipality of Taufkirchen near Munich, where the new Faculty of Aeronautics and Astronautics at the Technical University of Munich is currently being built. The test track is to consist of a one-kilometer circuit. Capsules are to travel here at a height of five meters. "The landing gear and cabin continue to be engineered under high pressure for the test track, " says Schindler. „The cabin structure is ready. We are now at the construction partner selection stage. For the chassis, we are in the final component selection and in discussions with parters. In parallel, we have pushed ahead with approval with TÜV Süd. The first hazard protocols have been drawn up, and the fire protection concept is almost ready.“ There is also not much left to do with the software. In terms of route optimization, congestion avoidance and routines to shorten waiting times, a lot would have happened over 2021.

The team believes the Ottobahn technology could be ready for commercialization by 2023 or 2024. One of the first tracks could be built just around the corner from the startup. Because from the test track, construction could theoretically continue from there right away. It would be perfectly feasible to build a track from the circuit in Taufkirchen, which is supported by 42 concrete girders, across the median strip of the autobahn to the Karl-Preis-Platz subway station in Munich’s Ramersdorf district and beyond.

Such a construction would be faster and cheaper than any extension of an underground or suburban rail line. With the elevated line, up to 400 meters of track could be completed per day. In addition, a ride in the gondola could be offered far more cheaply than in the subway or streetcar. Therefore, there would be many who are already interested in Ottobahn. „The interest from cities and municipalities is overwhelming,“ he says. „Ottobahn is now getting a lot of attention among transportation planners, and we’re part of a number of upcoming system comparisons for future routes.“

Ottobahn wants to become a big player in mobility

Interest in Ottobahn comes not only from Germany. Numerous cities and communities have contacted the start-up, which is actually still quite unknown. „A third of them internationally,“ says Schindler proudly. „In fact, we are addressing a global market. In the U.S. alone, the market for private passenger and pallet transport is around $1,500 billion.“ What makes the Ottobahn so attractive is that the concept, which is quite simple at its core, can be adapted and customized in many ways. On large corporate or port sites, the capsules could be converted into freight-only transporters.

An Ottobahn system does not have to operate in a city purely as a public transport system. Capsules could certainly be sold or leased to private individuals and businesses - and be hirable, like a public capsule. They could then be on the road as a mobile office or meeting room. It would also be conceivable to house a café or mini-market in a capsule. It would be ordered online and delivered by capsule directly to the customer’s own location. Packing stations such as those operated by DHL or Amazon could also be incorporated into a capsule. Instead of driving or walking there after work, the Packstation could come to the pickup.

The Munich-based start-up does not want to build and implement all of this itself. Rather, Ottobahn wants to focus entirely on the technology that keeps the system running and makes it possible. Much like a franchise operation, the Ottobahn concept is therefore to be licensed to transport and operating companies around the world that know the local market and will then take care of the construction and maintenance. This should also enable the railroad to gain a global foothold more quickly. 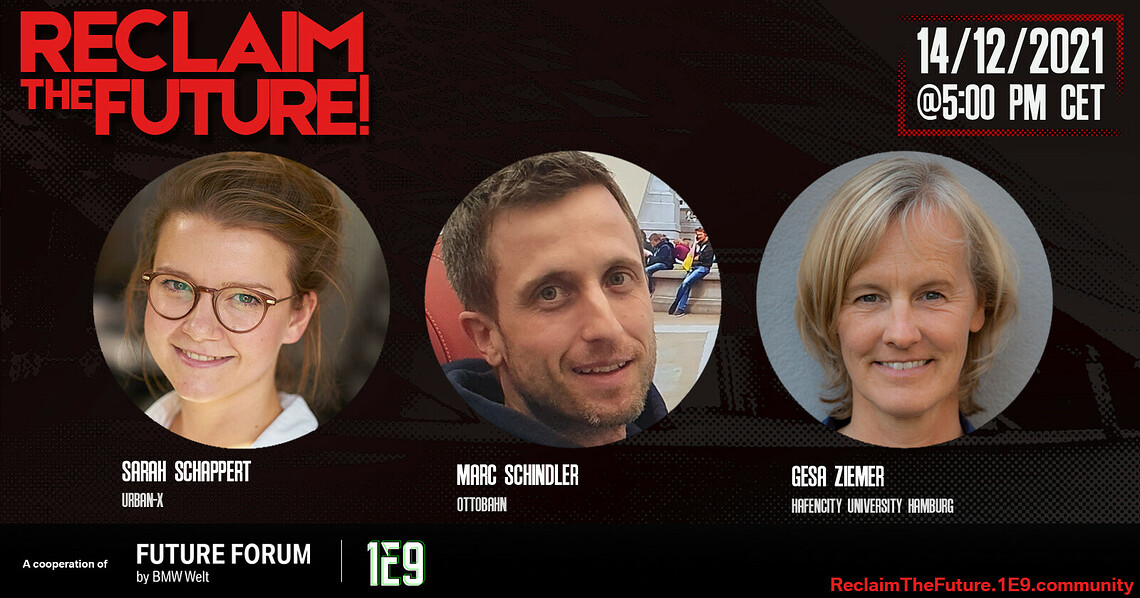 Marc Schindler from Ottobahn is one of the speakers of the nex Reclaim the Future! Event by 1E9 and the Future Forum by BMW Welt.1600×840 326 KB

Want to learn even more about Ottobahn and other concepts for future urban mobility? Then tune in on December 14 to the next edition of the digital event series „Reclaim the Future!“ by 1E9 and the FUTURE FORUM by BMW Welt: How Technologies are Shaping Future Urban Mobility. You can find all the information here.